If you have used or heard ( and hopefully heeded to)
the sayings: "The early bird gets the worm"
"Early to bed early to rise...
(makes a man healthy,wealthy, and wise)"
Then you are participating in a legacy of a
man who gave America much to appreciate!


If you've ever borrowed a book
from your local library,
you have a reason to thank Ben Franklin!


On July 1, 1731, Franklin and a group of members from the Junto, a philosophical association, drew up "Articles of Agreement" to form a library.

Ben Franklin was always interested in lightning and electricity.
It was a hobby for him but his ideas made important contributions
that scientists Thomas Edison and Michael Faraday continued with. 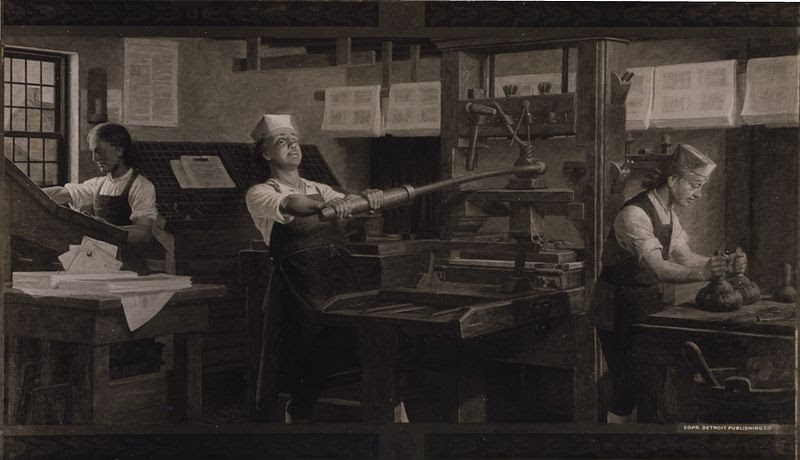 Ben Franklin started work in a print shop with his older brother
at the age of 12 as an apprentice
When Ben was 15 his brother founded the New England Courant
the first "independent" News paper of the colonies.
When his brother wouldn't allow one of Ben's
articles for publish  he decided to go under the pen name of
Mrs.Silence Dogwood which created alot of stir in the minds of the community.
Later he would be responsible for publishing
The Pennsylvania Gazette 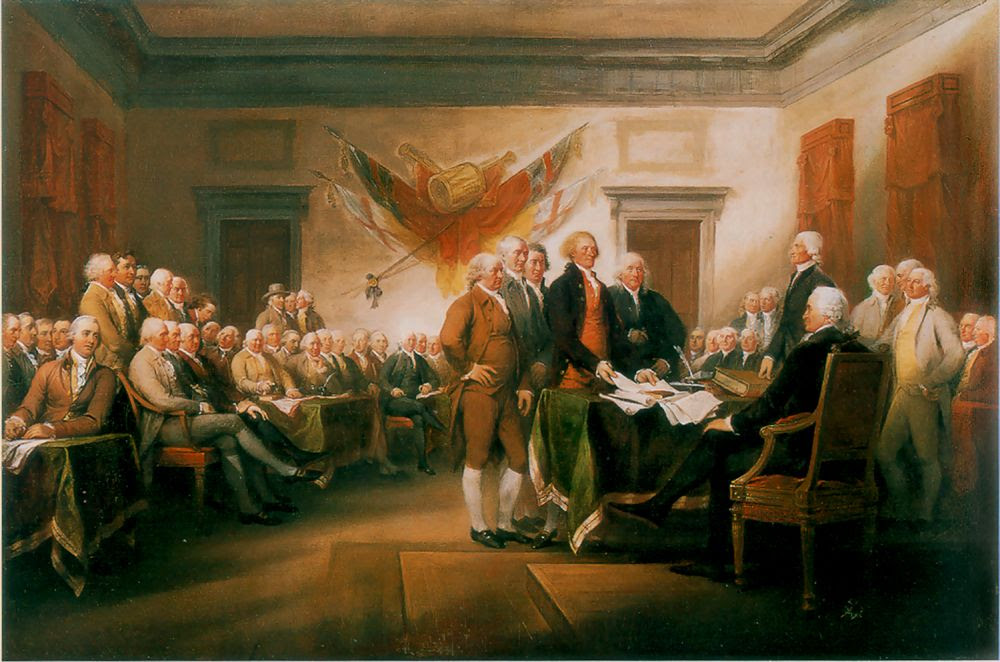 Benjamin Franklin is also responsible for  drafting the
Declaration of independence as a member of the  commitee of five.
And wisely made some final changes after Thomas Jefferson
sent him his draft
He was also one of the signers.


Of Benjamin Franklin's many achievements, probably the least well-known are his accomplishments in music. Not only did Franklin play viola da gamba and compose music, he also invented an instrument for which both Mozart and Beethoven composed music—the armonica, also known as the glass armonica or glass harmonica.    In 1761, while living in England, Franklin heard a performer playing musical glasses. Franklin wrote: "He collected a number of glasses of different sizes, fixed them near each other on a table, and tuned them by putting into them water, more or less as each note required. The tones were brought out by passing his fingers round their brims."

Franklin was charmed by the music, but felt that there was a better way to create the same sound. He had a glass maker create thirty-seven hemispheres made of glass, with each hemisphere being a different size and thickness to produce different pitches. Franklin ran an iron rod through a hole in the top of each hemisphere so that they could nest together from largest to smallest. He linked all of this to an apparatus like a spinning wheel, with a foot treadle that turned the rod, making the glass hemispheres rotate. Franklin moistened his fingers and held them against the rims of the glass hemispheres as they turned, producing a sound similar to the musical glasses. The glass hemispheres were color coded with paint to identify the notes.

Franklin mastered the instrument and took it to dinner parties and other gatherings to play for his friends and acquaintances. The instrument became popular and other performers started playing armonicas. In fact, it became so popular that thousands were built and sold, and one factory employed over a hundred people to build the instruments. Interestingly, many of the performers were women, which was somewhat unusual for the period. One of the musicians, Marianne Davies performed all over Europe and even gave lessons to the French queen Marie Antoinette.

Composers were also struck by the haunting sounds produced by Franklin's instrument. Mozart wrote two pieces for the armonica, including "Adagio and Rondo 617," and in 1815, Beethoven wrote a short melodrama where a narrator told a story while accompanied by armonica.

Some of the people who performed regularly on the armonica complained that the instrument was upsetting them emotionally. They said that the vibrations were entering their fingertips and causing mental anguish. There has been some conjecture that these conditions were caused by lead poisoning that the performers acquired from lead in the glass hemispheres of the instrument. Lead was a commonly used metal in the eighteenth century, so it is difficult to determine if these players' maladies came from the lead in the armonica or from other sources.

Many of us can not be thankful
enough for his commonly useful
eyeglass invention:
Ben Franklin-Father of the "Bifocal"
http://www.antiquespectacles.com/topics/franklin/franklin.htm
"He had talents and also numerous interests and his natural curiosity led to the search to discover ways to make things work better. One of his greatest innovations was “my double spectacles” and Franklin has been quite appropriately recognized and universally admired as their inventor."
.~.~.~.~.~.~.~.~.~.~.~.~.~.~.~.~.~.

What do you think Ben meant?


Ben Franklin wrote many words of wisdom. He used his printing press to share his wisdom with his fellow Americans. He hoped that his wise sayings would give people guidance for living their daily lives. Read some of his thoughts from "Poor Richard's Almanack" and decide what you think they mean. Then select one of his printing block letters to read some possible interpretations

Cheese and salty meat should be sparingly eat.

The Doors of wisdom are never shut.

Early to bed and early to rise makes a man healthy,
wealthy,and wise.

Full of courtesy, full of craft.

God helps them that help themselves.

If you'd have a servant that you like, serve your self.

If Jack's in love, he's no judge of Jill's beauty.

Keep thy shop and thy shop will keep thee.

A Lie stands on one leg, the truth on two.

A Man without a wife is but half a man.

Nothing but money is sweeter than honey.

One today is worth two tomorrows.

Pay what you owe and you'll know what's your own.

A Quarrelsome man has no good neighbors.

The Rotten apple spoils his  companion.

Speak little, do much.

Three may keep a secret, if two of them are dead.

Up, sluggard, and waste not life; in the grave will be  sleeping enough.

A good example is the best sermon.

You may delay, but time will not.

There are lazy minds as well as lazy bodies.

The "Thirteen Virtues" were developed at age 20 (in 1726)
and he continued to practice these in some form for the rest of his life.

1."Temperance. Eat not to dullness; drink not to elevation."
2."Silence. Speak not but what may benefit others or yourself; avoid trifling conversation."
3."Order. Let all your things have their places; let each part of your business have its time."
4."Resolution. Resolve to perform what you ought; perform without fail what you resolve."
5."Frugality. Make no expense but to do good to others or yourself; i.e., waste nothing. "
6."Industry. Lose no time; be always employ'd in something useful; cut off all unnecessary  actions."
7."Sincerity. Use no hurtful deceit; think innocently and justly, and, if you speak, speak accordingly."
8."Justice. Wrong none by doing injuries, or omitting the benefits that are your duty."
9."Moderation. Avoid extremes; forbear resenting injuries so much as you think they deserve."
10."Cleanliness. Tolerate no uncleanliness in body, cloaths, or habitation."
11."Tranquility. Be not disturbed at trifles, or at accidents common or unavoidable."
12."Chastity. Rarely use venery but for health or offspring, never to dullness, weakness, or the injury of your own or another's peace or reputation."
13."Humility. Imitate Jesus and Socrates

Benjamin Franklin
was born on January the Seventeenth 17th 1706
in Boston  Mass
He can be credited and remembered as:

a Librarian, a Printer, an Inventor,
a Philosopher, a Statesman, a Diplomat, an Ambassador,
a Scientist, a Musician,  an Economist, a Politician
an Author, an Inovator, and a Great Thinker of the age.
Toward the end of his life, he freed his slaves and was
a prominent  abolitionist.
He traveled to and lived in and adapted to
England and France. He certainly can be considered a man before his
time.
He was born an Englander but died an American
1790 aged 84
Benjamin Franklin's parents were both devoted Puritans,
but although he greatly admired the Christian faith
he never professed a personal belief in the Son of God. 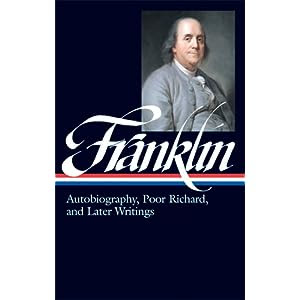 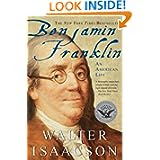 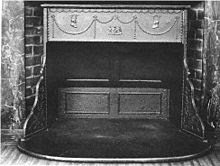 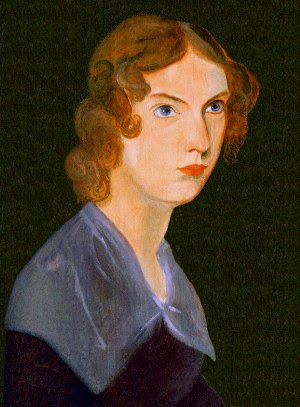 HOME
How brightly glistening in the sun
The woodland ivy plays!
While yonder beeches from their barks
Reflect his silver rays.
That sun surveys a lovely scene
From softly smiling skies;
And wildly through unnumbered trees
The wind of winter sighs:


Now loud, it thunders o'er my head,
And now in distance dies.
But give me back my barren hills
Where colder breezes rise;


Where scarce the scattered, stunted trees
Can yield an answering swell,
But where a wilderness of heath
Returns the sound as well.


For yonder garden, fair and wide,
With groves of evergreen,
Long winding walks, and borders trim,
And velvet lawns between;


Restore to me that little spot,
With grey walls compassed round,
Where knotted grass neglected lies,
And weeds usurp the ground.


Though all around this mansion high
Invites the foot to roam,
And though its halls are fair within
Oh, give me back my HOME!

The BUTT'RY and BOOK'RY
Striving to be a Proverbs Woman